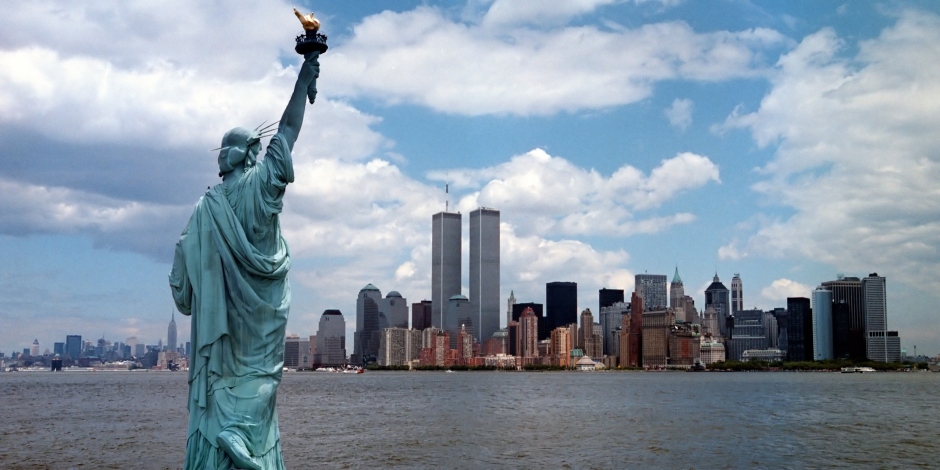 This was written one day after 9/11 and published two days later. I think it is worth remembering the raw anguish of that terrible day.

I want you to see the World Trade Center through my eyes.

I lived in metropolitan New York City for 17 years. My children were born there and grew up exploring lower Manhattan. I want you to see the World Trade Center through their eyes.

Manhattan lies at the center of a vast metropolitan area, stretching west into New Jersey, north into the foothills of the Catskills and east onto Long Island. The other four boroughs are congested and heavily ethnic, full of neat small homes bursting with barely assimilated Italian, Polish, Jewish and Irish families, along with a smattering of Germans and a little bit of every other nationality on earth, just for spice.

If you’re a fan of old movies, think John Travolta in Saturday Night Fever, not Woody Allen in Manhattan.

I hear that Liberty Park, where we once boarded the ferry from Jersey, is a morgue now. Those rude cabbies, Americans after all, are ripping out their back seats to carry bodies to the ferry.

The island of Manhattan is different. Manhattan is the city of our dreams, the city we love to hate, where skyscrapers rise to breathtaking heights and green space is limited to a generous series of parks. The streets are clogged with honking cabbies, trucks belching exhaust fumes and exasperated businessmen trying to get across town.

Manhattan is raucous yet refined, bumptious yet big-hearted. This is a young, vigorous city that has welcomed immigrants since its birth. Those immigrants have produced offspring just assimilated enough to move to the suburbs, and their descendants have percolated out into the rest of the country.

Every language on earth can be heard on the streets of Manhattan. You’re lucky if you catch a cabbie who speaks adequate English, but the street vendors selling pretzels, Nathan’s hot dogs, knishes and exotic delicacies are priceless.

The city itself is a patchwork of neighborhoods, each with its own distinct personality. To the north, along the East River, is the tony Upper East Side, home to the wealthy. Across vast Central Park is the funkier Upper West Side, home to the up-and-coming. Below Central Park, the broad boulevards of a great metropolis sweep southward. At the heart of Midtown is Times Square.

After running straight as an arrow from Harlem south, the boulevards lose their confidence somewhere below 14th Street and prove no match for the tourists’ favorite haunt, Greenwich Village, or its grimier cousin, the East Village. Lower still, there’s little planning in Chinatown or the Lower East Side—and stay out of Alphabet City, locals will warn you.

The massive bulk of the World Trade Center’s twin towers once loomed over lower Manhattan, shading the world’s financial nerve center, Wall Street. The buildings were so enormous, so dazzling, so overwhelming that only American wealth—and American hubris—could have dreamed them and built them.

Here, the American colossus flexed its muscle. American business ruled the world—still does, I guess—and the World Trade Center was a shrine to newness, bigness, brashness and brawn. Underneath the giant towers, the subways converged at a major station. Above, several floors of shops and restaurants comprised the ultimate shopping center. Above that rose floor after floor of offices occupied by the best and brightest of the business world.

The top of one tower was a favorite destination for tourists and school groups. I can’t forget the clusters of schoolchildren who made regular pilgrimages up to the observation deck, to “ooh” and “aah” at the spectacular skyline.

The air in lower Manhattan is salt-tinged, because the island juts into New York Harbor where the Statue of Liberty raises her beacon. I hear that Liberty Park, where we once boarded the ferry from Jersey, is a morgue now. Those rude cabbies, Americans after all, are ripping out their back seats to carry bodies to the ferry.

People keep comparing this to Pearl Harbor. They’re wrong in a way, because the casualties are much higher and they’re civilians. They’re right in a way, too, because Pearl Harbor woke up a sleeping giant. Once again we remember who we are.